Born and brought up in the Boston area and early education was in the Catholic parochial school system. Came to Oklahoma on a music scholarship in 1961. Also studied business and finance at OU.

I came to St. Joseph Old Cathedral in 1986. Continued education in the Theology program at Kansas Newman University in 1995 to which lead to the formation program to become a permanent deacon in 2001. I was ordained a Permanent Deacon of the Archdiocese of Oklahoma City on November 3, 2006 by Archbishop Beltran and the assigned to St. Joseph’s Old Cathedral. I have been on multiple committees including Liturgy and Finance. I was also the Director of the RCIA program for 15 years. 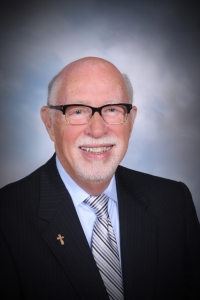